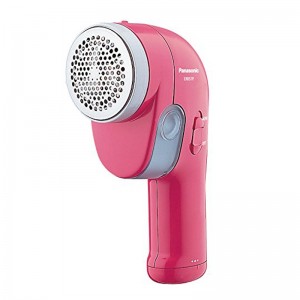 The stand out feature of this fabric shaver is the fact that it emits very low noise while it is being used. The handle is also very comfortable which is crucial for preventing any wrist injuries. It also has a powerful motor with blades large enough to ensure that it is shaving off the lint efficiently. The only thing you won't like about it is the shaving surface which is not large enough compared to other models in the market. Save for that drawback it comes recommended for its other useful features.

It is quite sizeable and light with a firm grip handle that can be locked in the palms quite comfortably for an extended period of use.

In case you need to use it in an environment that requires silence like a baby's room then you are covered as it emits noise as low as 60Db which is insignificant.

You can use it for up to 60 minutes at a time without the fear of it breaking down. Therefore you will have adequate time for you to remove lint from a good number of garments.

The shaving grill has sizeable holes that can capture lint of a diverse size quite efficiently. In addition to that, the fabric shaver has blades that are large enough to remove lint very fast.

The shaving head is not wide enough to cover a large surface area for fast lint removal.

10 items to compare »
▲
Max 5 items reached!
In order to give you the best experience, our website uses cookies. By continuing to use this site, you agree to our use of cookies.